This is also for you to know how much the other person knows about a subject. First, when we started a Brain Drain we discussed what we knew about geometry with our group. Next, we wrote what we said on the sticky note.When we were writing what we knew about geometry on a sticky note, most of us wrote about angles, shapes, polygons, volume, 2D, and 3D shapes. After that, our class discussed what we wrote on our sticky note. Some people wrote on more than one sticky note. Lastly, we stuck our sticky notes on the big green piece of paper and hung it outside to share our knowledge with everyone.

This is a great learning activity because we got to share what we knew and we got to teach our classmates. 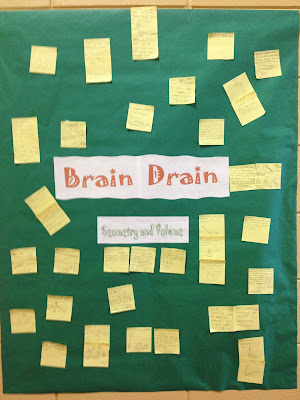 Posted by RamsaysClass at 12:31 PM No comments:

Today, we got the opportunity to do a GeoMEtry activity. This is where you get a group of people and make different geometric shapes with your body. We had to make shapes like circles, right angles,quadrilaterals, obtuse angles, and polygons. We took pictures of  our shapes, which you can see them below.
The way that we made shapes was by working together to curve and make our shapes. There were three groups that worked together to practice their geometry. We either could sit up and make shapes or lay down in the grass and make the shapes.A lot of the groups chose to lay down. It was not too cold today so it was a perfect time to do this activity.
Some shapes were easy to do and some were challenging. Mrs. Ramsay stood up in a chair to take the pictures so, it would look like it was a flat, 2D shapes.I think that this was a great learning experience for all of us because we had to really know our geometric shapes to make them.


P.S.   Do you know why this activity is called GeoMEtry?


Posted by RamsaysClass at 12:11 PM No comments: 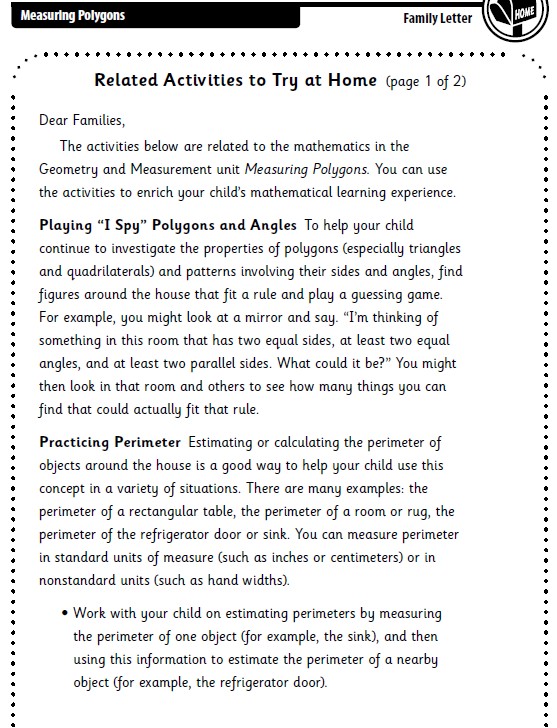 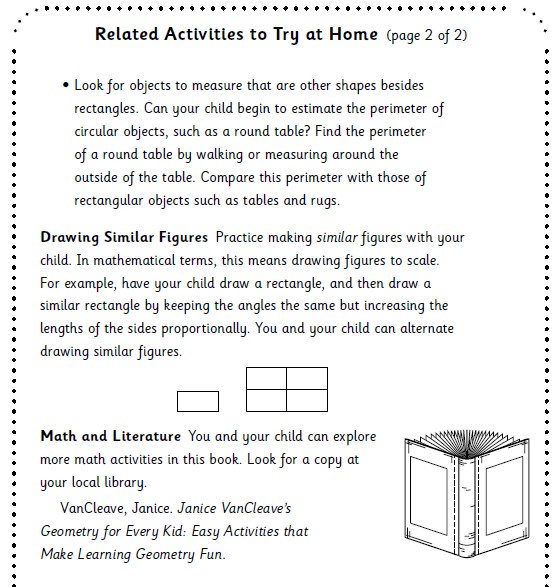 Posted by RamsaysClass at 6:00 AM No comments:

Below you will find the Family News explaining what we will be studying for the next couple of weeks. 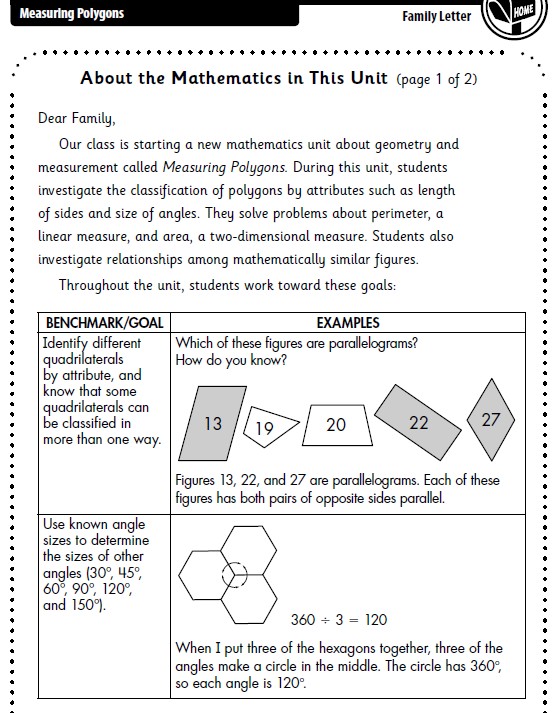 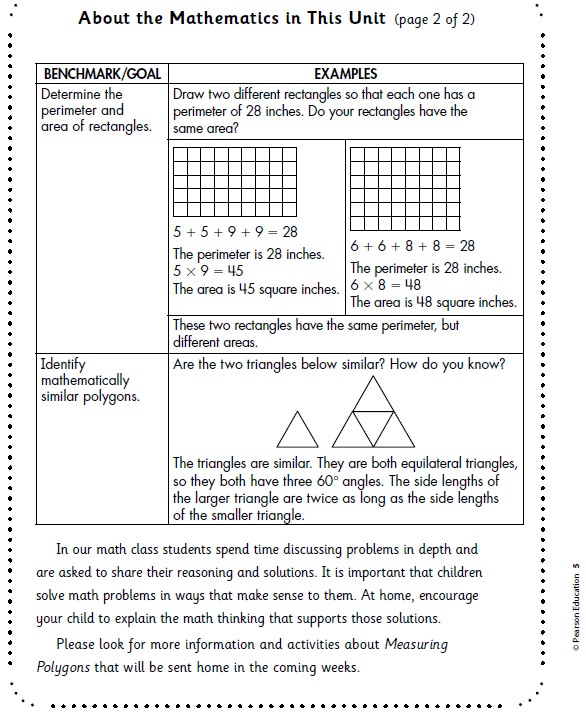 Posted by RamsaysClass at 6:25 AM No comments:

Our Learning at Zoo Atlanta

We had such a great time learning at the Atlanta Zoo. We wanted to share with you some of the cool things that we learned about different animals and their habitats. Do you know something interesting about an animal that you would like to share? Please leave it in a comment.

J.I: What I learned at the Atlanta Zoo is when a flaming is cold it curls its neck to its back so it looks like a giant puffball with legs. Something else I learned is that Atlanta Zoo is one of the largest zoo's in the country. 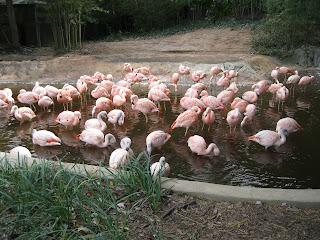 D.C:  I learned that flamingos live up to 20 years in the wild and up to 50 years in captivity. Adult flamingos are pink because they eat pink shrimp. Pandas are meant to be carnivores but they eat plants.

Z.F:   I learned that gorillas walk with their knuckles because they have callused knuckles.

C.A:  What I learned in the Atlanta Zoo is that was where Ivan lived. There are lots of smart animals. While we were down there,I discovered that Pandas eat more than 300 pounds of bamboo a day. 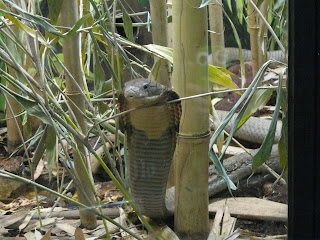 A.P: The first thing I learned at the zoo was that there is a snake called a Spitting Cobra. They shoot venom into your eyes. Next,I saw an alligator turtle which is a turtle with an alligator's skin as a shell. Last,I learned that a python doesn't have teeth. I also learned that it can eat an alligator whole.

A.M:  I learned that the gorilla eat fruit, insects, vegetables, and leaves. They are fast and can live up to 30 or 40 years. Ivan lived for 50 years.

E.G:    One thing I learned at the zoo is that gorillas are mostly vegetarians, and that silver backs are the leaders.

L.C:    What I learned at the Atlanta Zoo is Gorillas are mainly vegetarians. I learned that Meerkats might like to eat pumpkins. Another thing I learned is Vultures are big birds that mainly eat dead things. I also learned that all male gorillas turn into a Silver back.

N.E: I learned at the zoo that flamingos eat fruit vegetables and pink shrimp. They are pink because of the shrimp they eat. 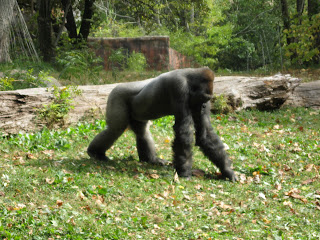 J.P:I learned that you shouldn't tease the reptiles because if you do they will get mad at you. Example:Snakes will strike at the glass if you tease them or bother them.

C.C: What I learned at the zoo was pandas were made to be carnivores but, they made adaptions and now they are vegetarians.

B.C:I learned that gorillas get fed twice a day. They are tomatoes and apples when we were there.

Do you know something interesting about an animal that you would like to share? Please leave it in a comment.
Posted by RamsaysClass at 11:08 AM No comments:

Remembering Ivan: Our Trip to the Atlanta Zoo

On October 30, 2012, we took a field trip to the Atlanta Zoo to see where the real Ivan, who inspired The One and Only Ivan, spent twenty years of his life.. We rode on a charter bus to the zoo. On the charter bus we could watch TV, eat snacks, and play our hand held consoles. We watched a zoo movie. Through all of these things, we were excited about arriving in Atlanta and seeing the gorilla habitat.

When we got to the entrance, we saw different pictures of animals which was like a preview of the amazing things to come. The zoo was amazing! We saw so many amazing animals. We saw flamingos, elephants, tigers, lions, meercats, pandas, bears, and gorillas.

Then we went to the Gorilla Habitat which is the largest in North America. It was feeding time in the different habitats. They have eighteen gorillas. In Habitat 1, one of the momma gorillas had a baby on its back. Many of them would run and pound on their chests to get attention. We learned that if a little boy gorilla is born, it will turn into a Silverback when they grow up.

Ivan was a real gorilla. He was born in Central Africa. He was taken in from the wild and to a mall. The docent could tell us all about Ivan's life. He lived there for twenty years after living for almost thirty years in a cage at a mall in Tacoma, Washington. He really did paint, but the zoo had to agree not to sell any of his paintings. They are now teaching all of the gorillas how to paint and sign their name with a thumbprint, just like Ivan. There is a habitat dedicated to Ivan's life with a memorial. It was nice to learn all about his life at the zoo.

Kinyani was really Ivan's girlfriend. She lived at the Atlanta Zoo, but has been moved to the Columbus, Ohio Zoo. She used to hide beside the observation house and then when it was full of people, she would run in front and hit on all of them windows as she ran by. Everyone would jump and screams and then she would look over her shoulder and cover her mouth like she was saying, "Did I do something?"

We took many photos at the zoo and we turned them into a Trip Wow. We really hope you enjoy "travelling" with us to visit the real home of "The One and Only Ivan."


The Atlanta Zoo Slideshow: Mrs.’s trip to Atlanta was created with TripAdvisor TripWow!
Posted by RamsaysClass at 11:56 AM No comments:

RamsaysClass
We are 6th graders at Northridge Middle School who love to create, compose, communicate and collaborate with others worldwide.

Please complete this Reflect, Relearn and Retry Contract in order to show evidence of your growth. 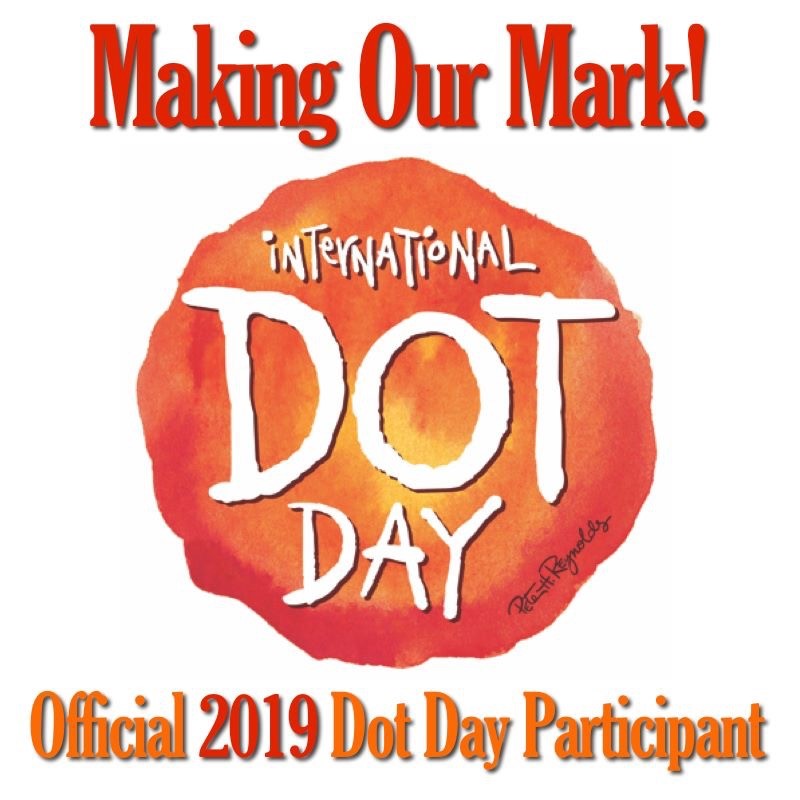 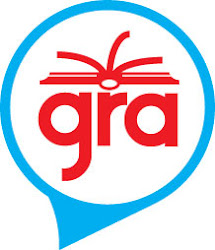